The Ominous Rise of Toddler Milk 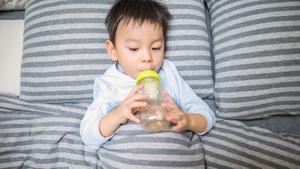 Baby-formula sales are slumping, so the companies that make it have turned to supplements for 3-year-olds.

The next move after a child is done with infant formula, according to nutrition experts, is to give them water or cow’s milk. But according to formula manufacturers, it’s to give them toddler milk. This is a powdered drink that is supposed to provide 1-to-3-year-olds with extra nutrients between the bites of broccoli they might be tentatively trying. And as infant-formula sales have slumped in recent years, baby-formula companies are starting to see toddler milk as their next move as well.

Toddler milk is the fastest-growing category of breast-milk substitutes, according to the World Health Organization, and is now available at grocery stores and on websites such as Amazon. But child-nutrition experts say this type of milk is expensive, unnecessary, and possibly even unhealthy. Although toddler milk can cost four times the price of cow’s milk, the drink consists mainly of powdered milk, corn syrup, and vegetable oil. As a result, it contains less protein per serving than cow’s milk does, researchers say, along with added sugar that cow’s milk lacks.

Evidence shows that American toddlers already drink too many sugar-sweetened beverages; the recommended level is none. And the claims that formula companies make about toddler milk—that it promotes healthy brain growth or supports digestive health—are dubious at best, experts argue. In a commercial for Enfagrow Toddler Next Step, for instance, a soothing voice-over says, “Enfagrow Toddler nourishes healthy brain growth because it has DHA,” as a toddler chugs happily from a red sippy cup. But nutrition experts say there’s no evidence that toddlers aren’t getting these nutrients already. “These companies are making claims that are lies,” says Blythe Thomas, the chief strategy officer at 1,000 Days, an organization that promotes child nutrition. “It’s not okay to lie to moms.”

In a study published today in the journal Public Health Nutrition, Yoon Choi, Alexis Ludwig, and Jennifer Harris, all from the University of Connecticut, found that as public-health organizations have promoted breastfeeding over infant formula, formula manufacturers have invested more of their advertising dollars in toddler milk. The study authors used data from Nielsen to analyze toddler-milk and infant-formula sales and advertising from 2006 to 2015. They found that sales of toddler milk more than doubled in the study period, from $39 million in 2006 to $92 million in 2015. In the same time period, TV, print, and online advertising spending for toddler milk increased from less than $5 million annually to more than $20 million annually, while advertising spending for infant formula declined.

Sales were especially high for the brands that had contracts to provide infant formula to participants in WIC—the food program for low-income women, infants, and children. The reason is there might be “some sort of loyalty to the brand because you’re using the infant formula for your baby,” says Fran Fleming-Milici, the director of marketing initiatives at the University of Connecticut’s Rudd Center for Food Policy and Obesity, who was not an author of the study.

To the study authors, and to other child-health advocates, the rise of toddler milk suggests that there should be more restrictions on how aggressively the product can be marketed to mothers. “I don’t think it’s a coincidence that infant-formula sales and advertising decreased at the same time that toddler-milk sales increased,” Choi told me.

Buying toddler milk instead of regular milk could have real consequences for a child’s development. Choi and her co-authors write that toddler milk might train children’s palates to prefer more sugary beverages, which could be harmful to their long-term health. The packaging of toddler milk is also similar to that of infant formula, the authors say, which might lead mothers to accidentally serve the product to infants. Toddler milk does not contain the same nutrients as infant formula, so in large quantities it could leave infants malnourished.

In an email, Lynn Kenney, the head of North American communications for Enfagrow’s parent company, RB, disputed this characterization of toddler milks. “DHA is an important omega-3 fatty acid and a building block of the brain,” she said. “Because toddlers are still developing and rapidly growing, it’s important that DHA remain a key part of toddlers’ diets.” She also said that toddler milks are good for children who have “nutrient deficiencies or dietary restrictions,” and that the packaging of the company’s toddler milk is very different from that of its infant formula.

The Infant Nutrition Council of America, the industry group of formula makers, said in a statement that “toddler drinks, which are intended for children over the age of one, can contribute to diet quality, and help fill nutrition gaps during this critical period of growth and development.”

Researchers, however, argue that toddler milk is an expensive distraction from what should actually be a simple, healthy diet. Experts recommend that by age 2, toddlers eat what the rest of their family eats, and that they drink water and plain milk. A statement put out last year by a panel of child-nutrition experts representing the American Academy of Pediatrics, among other groups, states that toddler milk is “not recommended.” If a child isn’t getting enough nutrients, it says, parents should just try to get their kids to eat more healthy foods.

“The messaging on the packaging leads you to believe that your child might be missing something unless you buy that product,” Fleming-Milici says.“It kind of plays into parents’ fear and concerns from wanting the best for their children.”

Products such as toddler milk also play into adult Americans’ fears, more broadly, that we aren’t getting enough nutrients and need supplements to “fix” us. From multivitamins to Soylent, people seem to have an instinctive belief in the power of synthetic products over natural ones. And marketers are happy to take us up on it.

Deciding whether to bottle or breastfeed your new baby is a big decision for new parents.

How Common Is ADD and How Can It Be Treated?

Attention Deficit Disorder, or ADD, is a mental disorder that impacts more than six million American children and their families, reports the ADD Resource Center.

Taking Care of Your Newborn

Caring for a newborn can be intimidating for some individuals, especially if it is your first baby. The pediatricians at Nova Pediatrics and Young Adult Medicine in Springfield are here to help.

You want your child to lead a healthy, happy life but it can be difficult if they are picky eaters or only seem to crave junk food.

The Importance Of Preventive Care

What parent doesn’t want to protect their child from getting injured or sick? While it will happen at some point, there are certainly ways that both you and your pediatrician can work together to ensure that your child doesn’t have to...

While we may not love it, all kids are going to act up, throw tantrums and be irritable at times;...